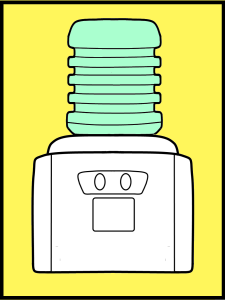 Asha still blamed Drew for planting the intruder all those months ago. Or had it been years? Drew strained his mind, searching the dark depths of his memory. The beginning of that regrettable period felt like an eternity ago; especially now it had ended. Those first few weeks were like a dream. A distant memory. And yet, although their lives had returned to normal, his presence was still felt by everyone he had crossed. The interminable topic at the water-cooler. A lingering curse. A mythical beast. The creature from an enduring fable on the perils of idle office gossip.

When Drew looked back to those days, as he often did, he continued to be astounded that one person had made such an immense impact on them. It made Drew chuckle. Because, it had been a funny time. Literally. The Office Joke, lurking around the corridors, terrorising its inhabitants. The memory seemed absurd. It was amazing how quickly things had relaxed now it was over. It was so easy to forget that underlying feeling of unease and unpredictability that permeated the corridors and leached into their offices, heightening their nerves. Sure, there were laughs, but some of the time things just got a little too weird. It was a sobering thought, which quickly darkened Drew’s mood. But was it ever really that bad? The Girls always made out that it was worse than it really was. Like some kind of nightmarish plague or a ghost in the dark, lurking in the shadows, waiting to eat our children or steal our souls. The Girls. Ever the alarmists. It had been nothing like that. It wasn’t like anyone was at risk of any danger. However, there was something about Him that kept everyone on the edges of their seats. As if they expected him to creep up at any moment and reek havoc.

Everyone welcomed an ending; including Drew. However, no one saw it coming. Not like that. It had gone on for so long that it seemed it would last forever. That he could last forever. But it did end, just as peculiarly and unpredictably as the man, himself. Everyone welcomed an ending. Drew just couldn’t help but wonder whether the whole thing could have happened differently.

“Remember, it was your fault! You led him to us in the first place.”

Asha wasn’t alone in protestations. Penny, Joan and Tiffany were always quick to share her sentiments. However, Asha was the leader of The Girls, or at least the most vocal of the group, and she gave Drew the most grief. It was dumb, and Drew saw passed her facade. Asha was simply a spoil sport, bitter and angry because she had been forced to share an office with him for a few months. Plus, Asha was a bit of a bitch. It was one of the reasons Drew and Asha were such good friends. However, Drew didn’t like it when Asha’s bitchiness was aimed in his direction, even if it was a just a bit of good-humoured banter. It didn’t feel good-humoured. Now who was the spoil sport?

The boys were far more relaxed about the whole thing. Sure, it had been a little weird, but they had fun with him; albeit at his expense. It was outrageously funny for a while. They even came to enjoy his company. He was their main source of office entertainment. But the joke became tiresome. And then there was that climax. That inconceivable ending. Months had passed and Drew was still baffled.

The Girls’ accusations were incredibly misconstrued, or at least a little exaggerated. It was true. Drew had been invited by The Boss to be part of the interview panel. But, Drew begrudged Asha’s claims that he was in any way to blame for everything that came after. During that interview, Drew thought that He had presented reasonably well. He seemed like a nice enough guy. However, Drew would be lying if he didn’t concede that there were a few things he noticed that should have raised alarm bells, or at least a few eye brows.

At twenty-seven, he was the same age as Drew. However, his career up until the date of his interview had taken a slightly different route. His education came late, having obtained his high school certificate at the age of twenty-three. Following this, he studied law at University, graduating with first class honours; a feat that was far more impressive than Drew’s pass degree. Drew was quick to point out that he had obtained his qualification from a fourth-rate university. High acclaim from a glorified technical college! Drew’s dirty, smug dig drew chuckles from the entire panel after the interview, and gave Drew a brief, euphoric sense of superiority. It was a brief high, until his sandstone-educated guilt set in.

Prior to his legal career, he worked as a bouncer for ten years. Based on his resume, Drew calculated that he must have had at least one period where he was bouncing and practicing as a solicitor at the same time. Impressive, if not slightly strange. His legal career was not quite as solid. He had completed his trainee year in Drew’s home town of Albany, which instilled in Drew feelings of sympathy and nostalgia. Following this, he jumped around from town to town in short-term positions, before ending up back in Perth. He finally secured a permanent position in a reasonably-reputed firm, however he had barely settled in and when he was interviewing with Drew and the panel.

“I noticed that you have only been in your current position for three months.”

“Why did you want to interview with us? Aren’t you happy in your current position?

“Then why are you looking to move so soon? Is there something we should no about?”

“I just feel like I am being pigeon-holed in one area, which I am not entirely committed to.”

“But you do know that, if you get this job, you will be doing that work here as well?”

“Yeah, but I was told before the interview that I would be doing a variety of things, right? Not just the same thing. Plus, I am looking for more money.”

At the time, Drew wasn’t sure that he bought it. But he didn’t dwell on his concerns for too long. Sure, he sat with an intense posture. Sure, he spoke with a strange whistle whenever he was formulating vowel sounds. Sure, his employment history was not ideal. But was this enough to pass him over for the job? Drew didn’t want to be petty. This guy seemed to have the right experience and Drew was so busy that he just wanted someone, anyone, to come in and take some of the weight. Drew was willing to look past his peculiarities and give him a chance.

It was a mistake.

A big, fucking mistake. Drew conceded this, now. However, Drew still felt that Asha was highly unjustified in pinning the entire fiasco on him. Drew was only one of five solicitors who sat on the interview panel. An interview panel that unanimously agreed to hire its one and only candidate. One Senior Associate. One In-house Counsel. Two Partners. Decades of experience all in agreement. Drew was only a junior solicitor at the time! It wasn’t like Drew had any real power. He was being humoured, brought along for the ride. Sure, he could have said, “This guy just isn’t right!” But, would it really have mattered?

Once hired, the matter was completely out of Drew’s hands. Drew wasn’t part of the senior management. Drew barely made it past plebeian status. He was a mere blip on the radar of office dynamics. A blip that occasionally got to sit in on interviews. Drew had never been happy with the part he played in that interview process, but he was prepared to accept the error of judgment and live with the consequences.

The Girls, however, took it upon themselves to take their complaints to The Boss on one drunken, debaucherous night. The night played out the way client functions always do. A reliable group of drinkers found each other and decided to blow off the event and move the party to a nearby bar. Plagued with insecurities and desperate to be “with it”, The Boss enjoyed a few too many sparkling wines, tipping him on the inappropriate side of drunk. The younger practitioners took advantage of his inebriation and convinced The Boss to buy rounds for the rest of the night.

One of the clients, who thought of himself as a “bit of a lad”, made an uncomfortably racist joke. Somebody cried in the toilets over an innocuous comment. Another went too hard and vomited on the door of a taxi. A newcomer quickly realised that this newfound drinking group was far more serious about drinking than anticipated and made a quick and covert exit. And The Girls, empowered by vodka and cranberry juice, cornered The Boss for a stern bitching.

“What’s wrong with him? You girls are so mean.”

“He makes me feel uncomfortable. He’s soooo, ya know? Gives ya the shivers!”

“Shut up! Gross. You don’t know. You’re the boss so he probably tries to act normal around you.

“Normal? Are you saying he’s not normal.

And there it was, with one foul swoop The Girls had branded a monster. A reputation, tarnished. An offender, exposed. The girls had ruined Him. The Intruder, The Joke, The Weirdo, The Creep. Was it fair what The Girls did to Him? As Drew looked out of his office window, thinking back to all those months ago, he just wasn’t sure. However, Drew sheepishly recalled it was his own drunken wit that elevated his newfound classification to the level of fiendish notoriety.

“Where is he lurking tonight, anyway? Did he sneak out with a girl? Come out, come out where ever you are, Mr Creepy Pants!”

A code name set. To be whispered in the corridors, exchanged over emails, conversed at the water cooler. It was unstoppable.

But so was he.

This is the Chronicles of Creepy Pants.

Don't be a Creep - Leave a Comment Cancel reply